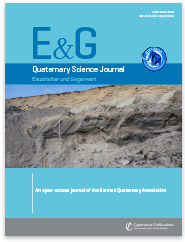 To guarantee fair access to high quality scientific publications, the Quaternary scientific community, as represented by the host institution of EGQSJ, the German Quaternary Association (DEUQUA), covers the article processing charges (APC) for the publications in EGQSJ. This is in line with the journal's general guidance, to put scientific quality first, and not let money be a limiting factor in open-access publication of high-quality research. However, all authors who have third party funding available to cover the APCs themselves can thereby actively support the journal, and with it the Quaternary scientific community.

EGQSJ was established under the name "Eiszeitalter & Gegenwart" (i.e. "ice age and present" in German) in 1951 and has since then covered the broad range of Quaternary research. By linking insights from the past (i.e. the ice age) with the present, our publications provide an interdisciplinary understanding and knowledge that becomes even more important in the context of the current challenges of global climate change. Please take your chance to join us in shaping the future of the journal by considering EGQSJ as a reputable, worthwhile alternative for publication of scientific papers, innovative express reports, and thesis abstracts dealing with Quaternary research. 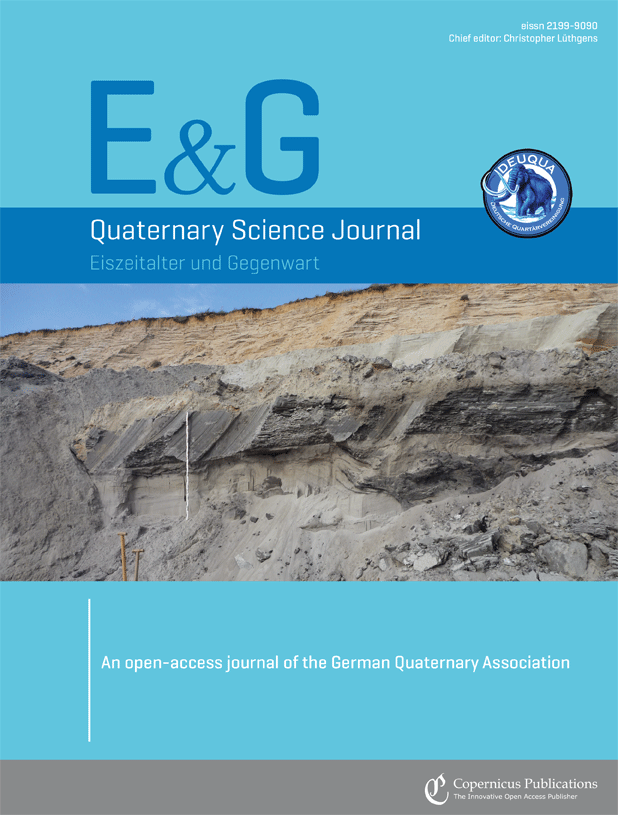 Sandhills, sandbanks, waterways, canals and sacred lakes at Sais in the Nile Delta
Penelope Wilson and Hosni Ghazala
E&G Quaternary Sci. J., 70, 129–143, https://doi.org/10.5194/egqsj-70-129-2021, 2021
Short summary
Short summary
Geophysical and archaeological work at Sais (Sa el-Hagar, Egypt) is analysed to discuss the relationships between the palaeolandscape, the evolving river and floodplain and human cultural activity at the site, where humans have lived since Neolithic times (4000 Before Common Era) until the present. The results show a close correlation with and reliance on the underlying sandhills for settlement and the way in which human activity has subsequently affected the floodplain landscape at the site.
Hide

A composite 10Be, IR-50 and 14C chronology of the pre-Last Glacial Maximum (LGM) full ice extent of the western Patagonian Ice Sheet on the Isla de Chiloé, south Chile (42° S)
Juan-Luis García, Christopher Lüthgens, Rodrigo M. Vega, Ángel Rodés, Andrew S. Hein, and Steven A. Binnie
E&G Quaternary Sci. J., 70, 105–128, https://doi.org/10.5194/egqsj-70-105-2021, 2021
Short summary
Short summary
The Last Glacial Maximum (LGM) about 21 kyr ago is known to have been global in extent. Nonetheless, we have limited knowledge during the pre-LGM time in the southern middle latitudes. If we want to understand the causes of the ice ages, the complete glacial period must be addressed. In this paper, we show that the Patagonian Ice Sheet in southern South America reached its full glacial extent also by 57 kyr ago and defies a climate explanation.
Hide

As of 1 November 2020 the direct settlement of article processing charges (APCs) between the ETH Zurich and Copernicus Publications will be valid for corresponding authors.

As of 1 November 2020 the direct settlement of article processing charges (APCs) between the ETH Zurich and Copernicus Publications will be valid for corresponding authors.

Gothenburg University Library and Copernicus Publications have signed an agreement on the central billing of article processing charges (APCs) to facilitate the publication procedure for authors.

Gothenburg University Library and Copernicus Publications have signed an agreement on the central billing of article processing charges (APCs) to facilitate the publication procedure for authors.